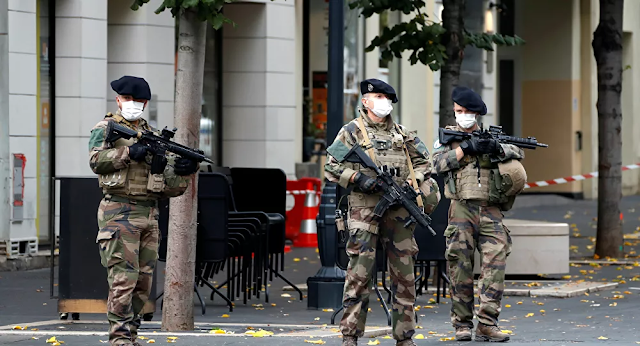 On Thursday morning, a knife rampage in and near a church in Nice left at least three people dead, including one woman who was reportedly beheaded; several people were injured. France has now opened an investigation into the attack over “killing linked to a terrorist organisation”, as President Macron has just arrived to the city.

The mayor of Nice, Christian Estrosi, has Tweeted that everything currently leads authorities to suggest that the Thursday stabbing should be treated as a “terror attack in the Notre-Dame Basilica”.

The Nice attack, that left at least three people dead, was met with a wave of condemnation and sympathy from international leaders:

“We are in particular outraged by the cynical and cruel crime committed inside the church. We have once again seen that the concept of humane morality is absolutely alien to terrorists. Obviously, the fight against international terrorism calls for real unification of effort of the entire global community,” Russian President Vladimir Putin in a telegram to French President.

Putin expressed “deep condolences” in relation to the “tragic consequences of the terrorist attacks in France”, according to the Kremlin press office.

The President underlined that Moscow was ready to combine efforts with France and other international partners in a fight against terrorism. Earlier Kremlin called the Nice attack a “horrible tragedy”.

German Chancellor Angela Merkel said that she was “shocked” by the “cruel murders” in France and expressed solidarity with the nation.

“My thoughts are with the relatives of the murdered and the injured. Germany owes its solidarity to the French nation in these difficult hours,” the Chancellor was quoted as saying.

​British Prime Minister Boris Johnson called the stabbing a “barbaric attack” and underlined that the UK was standing “steadfastly with France against terror and intolerance”.

I am appalled to hear the news from Nice this morning of a barbaric attack at the Notre-Dame Basilica. Our thoughts are with the victims and their families, and the UK stands steadfastly with France against terror and intolerance.

Canada Prime Minister Justin Trudeau also denounced “unjustifiable acts, which have no place in our society”.

“Devastating news from Nice, where a terrorist attack at a church claimed several lives. Our thoughts are with the loved ones of the victims”, Trudeau said on Twitter.

​Despite a recent diplomatic row between Ankara and Paris, the Turkish Foreign Ministry issued a statement condemning the attack, saying that “there is no excuse to take someone’s life”.

​”It is clear that the ones who commit such a violent act in a holy place have no respect for any humanitarian, religious, or moral values,” the ministry said.

“We unequivocally condemn the odious terrorist attack at the Notre-Dame Basilica in Nice. We offer our condolences to the French people”, Ibrahim Kalin, the spokeperson for President Recep Tayyip Erdoğan, later added on Twitter in French.

Dutch Prime Minister Mark Rutte noted that France was “not alone in the fight against extremism”.

European Commission President Ursula von der Leyen condemned the “odious and brutal attack” and stated that the world remained united and determined “in the face of barbarism and fanaticism”.

Aleksandar Vucic, the president of Serbia, sent his condolences to relatives of those murdered in the attack, French people and the country’s president Emmanuel Macron.

“Terrorism will never win over the moral and human values we share,” he tweeted.

All our thoughts are with the relatives of those murdered in the terrorist attack in Nice, the people of France and President @EmmanuelMacron. Terrorism will never win over the moral and human values we share.

​Saudi Arabia, which had also suffered a stabbing attack at the French consulate on Thursday, “strongly” condemned the assault in Nice, maintaining that the kingdom “categorically rejects such extremist acts” and practices which generate “hatred and violence”.

Commenting on the Nice attack, the Vatican said that terrorism was “never acceptable” as the rampage in church had “sowed death in a place of love and consolation, the house of the Lord”.

On Thursday morning, three people were killed and several injured at and near the Notre Dame Basilica in central Nice by a man wielding a knife. At least two of the victims are said to have been murdered inside the church, including one woman, who was reportedly beheaded, and a sexton. According to Nice’s mayor, Christian Estrosi, the suspected attacker was later shot and seized by the police, and is believed to be in hospital. Estrosi said that he was heard shouting “Allahu Akbar”, even after his arrest. 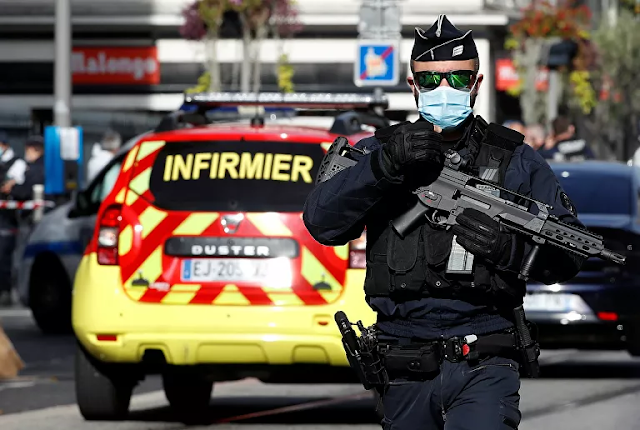 A security officer guards the area after a reported knife attack at Notre Dame church in Nice, France, October 29, 2020

The attack is now being investigated by France’s anti-terrorist body over “killing linked to a terrorist organisation”. France has also brought its national security system, Plan Vigipirate, “to the level of an urgent emergency throughout the country”, Prime Minister Jean Castex said.

The stabbing took place less than two weeks after Paris teacher, Samuel Paty, was beheaded by an 18-year-old of Chechen descent, Abdoullakh Anzorov, after Paty showed cartoons of the Prophet Mohammad to his pupils during a freedom of speech class. His murder has been treated as a terrorist attack.