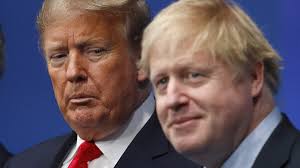 London moved to ban the purchase of 5G infrastructure from the Chinese tech giant on Tuesday, with a member of the cabinet saying the decision was based on concerns over “the long-term security of our telecoms.”

The risk of US sanctions prompted the UK to change its position on allowing Huawei to build part of the country’s 5G infrastructure, a spokesman for Prime Minister Boris Johnson has said.

“The reason for the UK’s change of position was the impact of the US sanctions which were announced in May,” the spokesman said, speaking to reporters on Wednesday. “Those sanctions were like nothing we had ever seen before, and led to the National Cyber Security Centre (NCSC) changing its assessment,” he added.

“The US sanctions make it impossible for the NCSC to continue to guarantee the security of Huawei equipment in the future,” the spokesman clarified.

‘If They Want to Do Business With Us, They Can’t Use It’

The No. 10 spokesman’s comments appear to contradict previous statements by members of Johnson’s cabinet denying that US pressure had played any role in London’s decision.

“I talked many countries out of using it; if they want to do business with us, they can’t use it. Just today, I believe that the UK announced that they’re not going to be using it,” Trump added.
Health Secretary Matt Hancock appeared to dismiss Trump’s remarks, saying that “all sorts of people can try to claim credit for the decision but this was based on a technical assessment by the National Cyber Security Centre.”

‘Does Britain Want to Be the US’s Cat’s Paw?’

China blasted the UK’s decision to ban Huawei from 5G infrastructure projects earlier Wednesday, with the foreign ministry accusing London of colluding “with the United States to discriminate, suppress and exclude Chinese companies” on the basis of zero evidence, and asking whether the UK wanted to “maintain its independence status or be reduced to being a vassal of the United States.”

Chinese Ambassador to the UK Liu Xiaoming warned that the UK’s decision would impact future Chinese investments in the country, accusing London of “simply dump[ing]” Huawei, and stressing that other Chinese companies would take note.

Following months of debate and pressure, the UK announced a ban on Huawei 5G infrastructure starting in late 2020, citing alleged threats to “the long-term security of our telecoms.” Existing Huawei 5G equipment already installed is expected to be removed by 2027.

The UK formally permitted the Chinese tech giant to take part in the construction of its 5G mobile communications and internet infrastructure earlier this year despite warnings from Washington that this would endanger intelligence sharing cooperation between the Five Eyes intelligence alliance (which along with Britain and the US also includes Australia, Canada and New Zealand).

The UK is one of multiple US-allied and partner nations which the Trump administration has pressured to stop doing business with Huawei after the US itself slapped restrictions on the company and classified it a threat to national security. US allegations against the Chinese giant include claims that it has engaged in technology theft, and that its equipment may contain hidden code or other tools to allow the Chinese Communist Party to spy on the West. Both Huawei and Beijing have denied these claims, accusing the US of unfair business practices, and suggesting that the US itself is the world’s largest state eavesdropper, spying not only on adversaries but even its own allies.